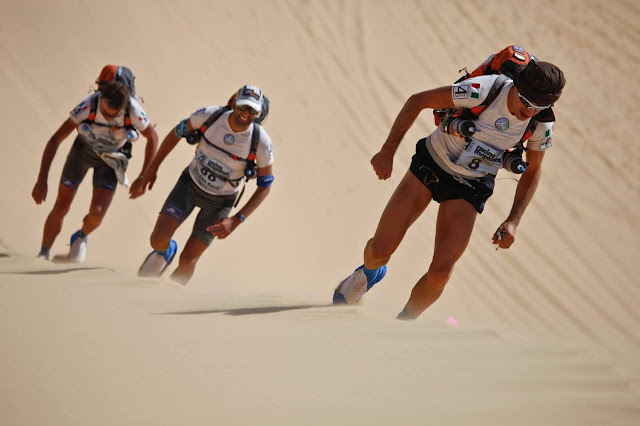 To say that participants competing in the 4 Deserts Grand Slam are mentally tough is an understatement. These men and women are going beyond the limits of physical fitness and mental endurance. Not only are the 4 Deserts located in some of the largest and most perilous deserts on the planet, it is a 7-day, 250-kilometer race 100% self-supported. Yup! You heard it correctly. All participants are required to carry their own equipment and food in some of the most barren and challenging landscapes. And, while it might not seem reassuring to most, drinking water and a tent are provided by the series.
Below, we’ve outlined a few important details about each of the 4 Desert races and the differences between them when it comes to location, climate, weather, and more. Along with that, we have listed a Top 20 list of, what we feel, are some of the most important pieces of information to note before signing up (if you dare) for one of the most intense and challenging endurance races in the world.

Along the dune ridge in the Sahara Race. Photo Credit: 4Deserts
Date: April 30, 2017
Location: Skeleton Coast National Park in Swakopmund, Namibia
Climate: One of the oldest deserts with the largest dunes in the world spanning 300 meters high and 32 kilometers long. The
Weather: One of the driest countries in Southern Africa. Temperatures on the coast can get down to 10 degrees Celsius at night and reach 25 degrees Celsius during the day. Expect coastal fog and a breeze. Humidity is low and wind can be a factor.
Itinerary: Click here.

Running through the Gobi Desert. Photo credit: 4Deserts
Date: June 18, 2017
Location: The Gobi Desert in Hami, eastern Xinjiang Province, China
Climate: 5th largest and windiest desert in the world. Varies in topography to include plain, desert, and mountain climates.
Weather: Temperature changes over the course of the race and can include intermittent rain, sleet, and high winds. Temps can reach 40 degrees Celsius during the Summertime. The area gets less than 27mm of rain per year.
Fun Fact: The Gobi march was founded in honor of three missionaries: Mildred Cable and sisters Francesca and Eva French.
Itinerary: Click here.

Starry night during Atacama Crossing race. Photo Credit: 4Deserts
Date: October 1, 2017
Location: Atacama Desert in San Pedro de Atacama, Chile
Climate: Driest non-polar desert in the world and one of the driest places on Earth.
Weather: Extreme weather is likely including strong winds, and rain. Temperatures -1 degree Celsius by night and 35 degrees Celsius by day.
Fun Fact: People began to settle in the Atacama Desert around 1500BC according to some research.
Itinerary: Click here.

Danko Island surrounded by icebergs at the Last Desert race. Photo Credit: 4Deserts
Date: November 2018
Location: Weather permitting, this race takes place in up to 6 locations in the Antarctic Peninsula and Mainland.
Climate: Largest desert in the world with 70% of the worlds fresh water (or ice, rather). Coldest, driest, and windiest continent and has highest average elevation.
Weather: Temperatures can be -89.2 Celsius although with the race happening in the Southern Hemisphere summer, temperatures are expected to be around -20 Celsius. Racers can expect winds and very strong sun and more than 20 hours of daylight.
Fun Fact: As of 2016, there are roughly 135 permanent residents with up to 5,000 people residing throughout the year at the research stations across Antarctica.
Itinerary: Click here.
*Invitation only

Atacama Crossing part of the 4 Deserts Gran Slam. Photo Credit: 4Deserts
1. Athletes can compete in the 4 races in any order they would like except for The Last Desert race in Antarctica.
2. The Last Desert race in Antarctica is invitation only (must complete 2 other races to get an invite).
3. There are approx. 47 competitors have completes the 4 Deserts Grand Slam in a one-year period of time.
4. The quickest completion of the 4 Deserts was a time of 23 hours, 12 minutes, and 33 seconds.
5. 20% of participants run the entire course, 60% combine walking and running, and 20% walk the entire course.
6. You can’t take your sweet time and go as long as you want, because there are cut off times! Cut-off times are based on average speed of 4km per hour.
7. You must be between the age of 21 and 70 to compete.
8. 80% of competitors are men and the remaining 20% are women.
9. Worried about safety on the course? There is a pro-medical team working on-site throughout the event. There is approximately 1 medical doctor per every 25 competitors.
10. In ten years, there have been over 10,000 competitor’s registrations for the 4 Desert races.
11. The Sahara Race has been relocated to Namibia due to instability and conflict in Northern Africa where it normally occurs.
12. These races do not require qualification, but don’t think you can just sign up without months of training.
13. You need a medical certificate from a registered physician before race day.
14. The cost isn’t cheap either! The entry fee is around $3,700 per event.
15. All 4 events are capped between 150-200 competitors.
16. Expect solitude. While the races start out thick with people, sooner than later, the crowd thins and you are on your own in a desolate, hot or freezing environment.
17. Time Magazine recently ranked the 4 Deserts #2 on its list of the world’s top endurance competitions.
18. You’re not just racing for yourself, you’re racing for charity. Millions of dollars have been raised for hundreds of charities around the world through the 4 Desert Series races.
19. If you find a running buddy, don’t expect to “chat” with them. There could be a language barrier. There are more than 30 countries represented in each 4 Desert race.
20. You can compete as a team or individual.
And, if the above Top 20 aren’t enough to rev-your-engine, maybe a few words of wisdom and advice straight from the horse’s mouth would help! We had a chance to speak with the Event Director with the 4 Deserts Race Series, the lovely, Sam Fanshawe. Here’s what she had to say (brace yourself for goosebumps):